I get asked a lot why I believe that young adults leave their faith.  I guess it is because, I’m involved in a ministry whose purpose is to address the statistic that 70% of Christian raised young adults leave their faith after graduating High School.  There are many reasons; like their faith was never their own, they were hurt by a Christian, something happened within the Church that turned them off, they saw Christians acting one way at church and another way elsewhere, and the list goes on and on.

Well here is what I believe is the reason why the vast majority leave.  They never understood the WHY. 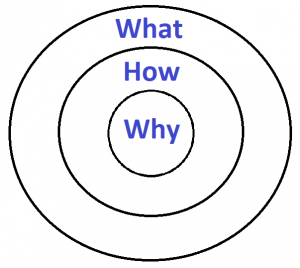 Just about every kid who has been raised in a Christian home understands the WHAT.  At its most simplistic form, the What is that their family are Christians.  They understand what being a Christian means, and what most of our beliefs are.  We believe there is a God, that He is a triune God (Father, Son, Holy Spirit), that He created everything, that He sent his son Jesus Christ who was born of a virgin, who lived a sinless life, and willingly died on the Cross to pay the punishment for our sins, and rose on the third day, etc.  Since they grew up in the church, they have heard all of the Bible stories, so they understand the What.

A smaller percentage of kids, who were raised in a Christian home, understand the HOW.  The How is how we live our lives as Christians.  We pray, we read the Bible, we go to church, we try not to sin, we treat others as we would want to be treated, etc.  Some kids see their parents living out their Christian walk, and therefore are exposed to the How.

Very few kids understand the WHY.  In fact, many Christian parents and older adults do not fully understand and can articulate the Why.  When I ask people “Why are you a Christian?”, I get a lot of different responses like; I grew up in a Christian home, I went to church all my life, I saw a miracle happen, something happened that made me realize there was a God, I felt God’s presence, etc.  If you think about all of these answers, they could be the same for a Buddhist, Hindu, Muslim, or someone who practices any other religion.  So you can see how our children can get confused when they move out into the real world, and the reasons for being a Christian seem the same as the reasons others give for believing else.

The best way your kids can know the Why is through Apologetics.  Apologetics is the religious discipline of defending or attempting to prove the truth of religious doctrines through systematic argumentation and discourse.  In other words, knowing why we believe what we believe, and being able to articulate and defend it.

Here is a simple but powerful Apologetics example of something you can easily share with your kids, so they can believe the truth of scripture.  Jesus fulfilled over 300 Old Testament prophecies written about him hundreds of years prior to being born.  Let’s look at the Mathematical probability that it took for Jesus to fulfill only 8 of them.

The following probabilities are taken from Peter Stoner in Science Speaks (Moody Press, 1963) to show that coincidence is ruled out by the science of probability.  Stoner says that by using the modern science of probability in reference to eight prophecies, ‘we find that the chance that any man might have lived down to the present time and fulfilled all eight prophecies is 1 in 1017.”  That would be 1 in 100,000,000,000,000,000.  In order to help us comprehend this staggering probability, Stoner illustrates it by supposing that “we take 1017 silver dollars and lay them on the face of Texas.  They will cover all of the state two feet deep.  Now mark one of these silver dollars and stir the whole mass thoroughly, all over the state.  Blindfold a man and tell him that he can travel as far as he wishes, but he must pick up one silver dollar and say that this is the right one.  What chance would he have of getting the right one?  Just the same chance that the prophets would have had of writing these eight prophecies and having them all come true in any one man.”

The estimated number of electrons in the universe is around 1079.  It should be quite evident that Jesus did not fulfill the prophecies by accident. He was who He said He was; the only way (John 14:6).

The above is just one Apologetics example.  Having your kids learn these things will help them understand the Why.  It will give them confidence that Christianity is the only true religion, Jesus is who He proclaimed to be, and He is the only way to Heaven.

Here are some great apologetic organizations to check out.  You will find lots of great material that you can share with your children.

Posted in raisedUP and tagged Apologetics, Why are you a Christian.